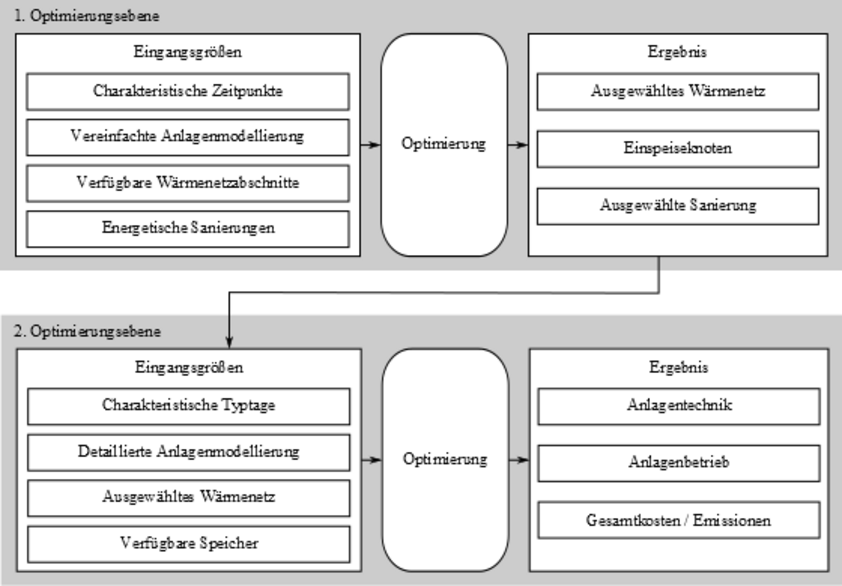 For the optimal dimensioning and operation of district heating networks, methods of mathematical optimization can be used. These methods often suffer from high computational costs and poor scalability. The aim of this work is therefore to develop an approach to reduce computational complexity. This is done by introducing a two-level optimization. On the first level a less detailed optimization is executed to attain a rough dimensioning of the energy supply system. The results of this first optimization are then used as an input for the subsequent second level. As the solution space of the second level is restricted, a more detailed problem description can be used for the second optimization.

During the first level optimization it is determined, which buildings are connected to the heating network, which connection paths are optimal and which building function as a feed-in point. Moreover, it is determined whether a refurbishment is reasonable. On the second level, a more accurate design and operation of the power plants is determined. CHPs, boilers, electrical heaters and PV modules are used as energy suppliers. Furthermore, different subsidies are taken into account.

To verify the developed approach, it is applied to a city district with six buildings considering four different scenarios. The minimization of the annual costs using the two-level optimization only differs by 5% from a given reference optimization. The difference in total annualized costs between the two optimization levels accounts for only 3%. This good agreement shows that the model leads to valid results despite the simplifications made and that the chosen approach is therefore justified. As the computational time of the approach takes less than one minute, it is preferable compared to existing models that take hours.

Moreover, the approach has been applied to larger city districts to investigate its scalability. It is shown that the number of evaluated time steps has to be increased with an increasing number of buildings. The results show that for a district with 11 buildings a solution can be found within three minutes. However, while applying the two-level optimization to even larger districts with 79 and 187 buildings, the computational time increases significantly.