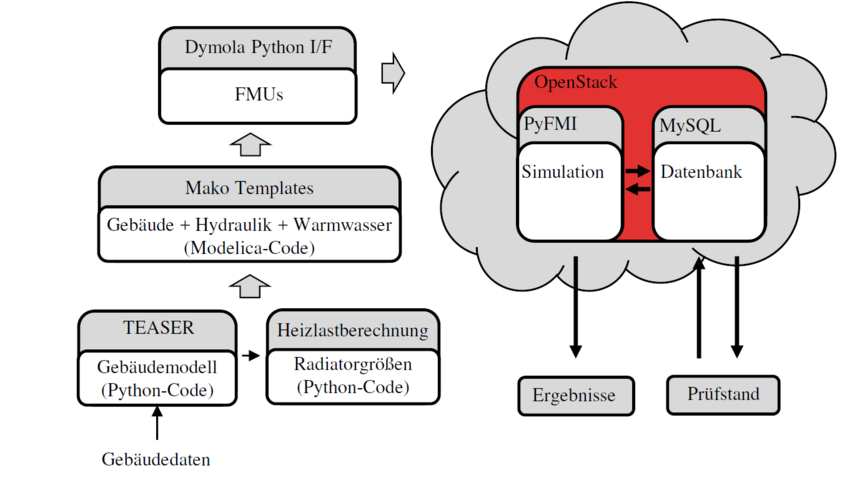 The determination of exact Seasonal Coefficients of Performance for heat pumps represents a challenge that is being investigated at the Institute for Energy Efficient Buildings and Indoor Climate (EBC) at RWTH Aachen University using a hardware-in-the-loop test bench. To do this, the simulation model of a building and the associated hydraulics are coupled to a heat pump at the test bench. To both, the simulation and the heat pump, the same environmental conditions are given, which is a achieved by a climate chamber in case of the heat pump. The creation and parameterization of the currently used simulation model requires a high degree of expertise in the modeling software Dymola and is a time-consuming task. Furthermore, the detail level of the model leads to high calculation times. Thus, as a first step of this thesis the applicability of a reduced simulation model is investigated. For this purpose, several simulationmodels with varying levels of detail are generated using the tool TEASER and the FastHVAC-library, which is part of the AixLib-library. The validation of the reduced models is based on an existing detailed model of a single-family dwelling and shows that the reduced models deliver comparable results with significantly reduced parameterization and calculation effort at both, annual and daily level. In the second step, an automated workflow for the creation and the subsequent exportation and simulation of the model in a cloud environment in the programming language Python is developed. The implementation of the simulation in the cloud is successfully being tested on the basis of a test bench experiment. Therefore, the simulation is performed in an OpenStack instance. In the future the combination of simplified parameterization, reduced model, automated workflow and simulation execution in the cloud will allow to carry out tests at the test bench with minimal effort and from any location. This lays the foundation to make the test bench accessible to non-experts and organizations outside the institute, thus, enabling a simple and cost-effective investigation of energy-efficient building systems on a global scale.