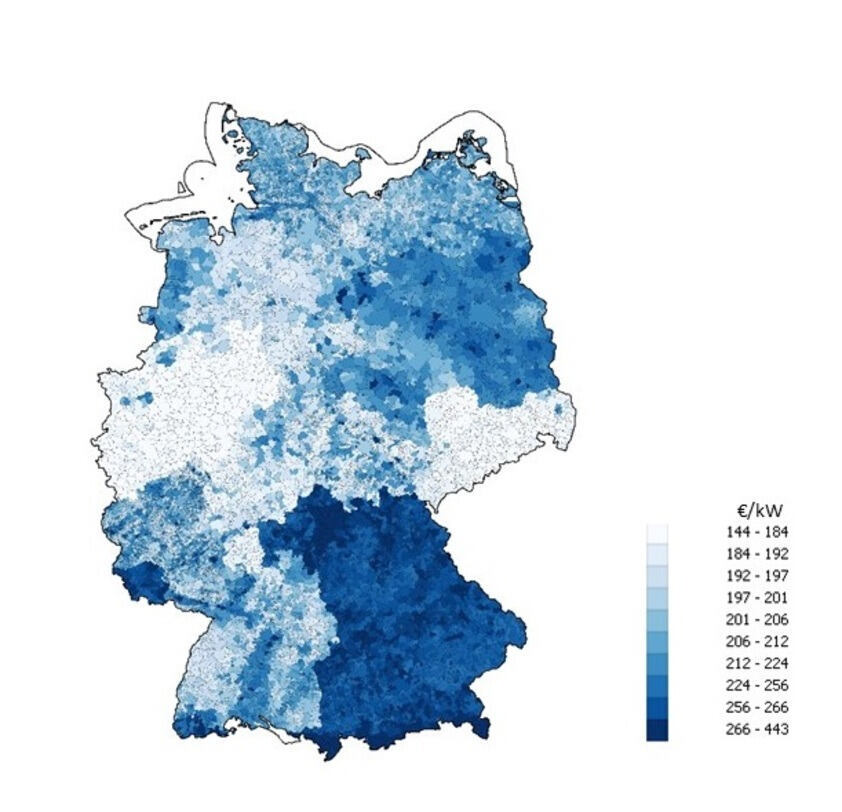 Copyright: EBC Distribution of site specific capital expenditure of wind turbines in Germany considering geographic and legal aspects. Noticeable are varying costs across the different states and locations. This is due to the different legal standards, terrain and dist

The transition from conventional to renewable power generation in Germany provokes a further expansion of installed capacity of wind turbines and photovoltaic systems. For either of both, the choice of suitable sites depends on various aspects such as legal restrictions, public acceptance and economics. Capital costs and operational expenditure thereby constitute a major leverage on the economics of a specific site. The Objective of this thesis is the analysis of the capital and operational expenditure of wind turbines and photovoltaic systems under consideration of site-specific cost dependencies.

In this context the analysis focusses on the identification and analysis of costs, which are influenced by site-specific characteristics. These costs include expenditure for foundations, grid connection, infrastructure, planning and permitting. The identified costs vary widely considering the influence of the soil structure and the terrain of a respective location as well as distances and legal standards.

For these costs a model is elaborated, which is able to compute the capital expenditure of a specific site. It focusses on wind turbines but also refers to cost components of photovoltaic systems. Additionally the model includes the calculation of the levelized cost of electricity considering site-specific wind conditions and different types of wind turbines.

The application of this model on Germany shows a wide range of costs at different sites. The examination of these reveals, that the costs are systematically distributed across the country. According to the results, the site dependent capital expenditure is lower in densely populated states with low planning and permitting costs. It also indicates that the costs of wind parks are lower than those of single wind turbines due to economies of scale. However, the examination of the levelized cost of electricity shows that these effects have a limited impact on the actual LCOE value, whereas the site-specific wind conditions and the choice of suitable wind turbines have a major impact.