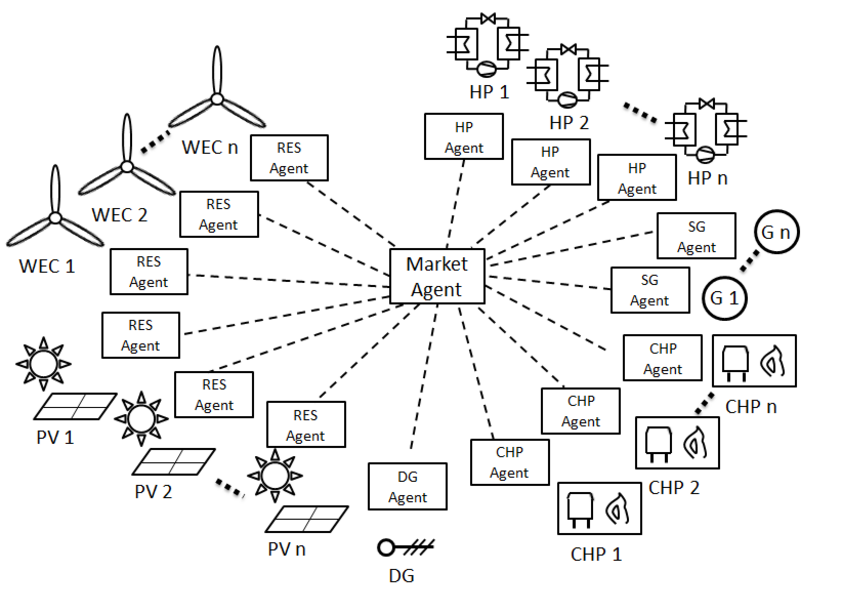 In this thesis, approaches for multi-agent systems (MAS) for energy-management of microgrids are analyzed and a novel approach of an MAS based control strategy in a microgrid is developed on a conceptual level.

Initially, the state of the art in intelligent control strategies for the scheduling of microgrids is reviewed with respect to the scheduling of flexible consumers and generators. Based on a comparison of the approaches found, the MAS approaches are subdivided into three types: In cooperative approaches, MAS agents collaborate in order to achieve the global objective. Competitive MASs are generally market based and can be subdivided again into two types. Market clearing price based MASs and approaches which are based on bargaining between the agents. It is noted, that also competitive MAS can be applied in terms of a global objective, which is then followed indirectly towards the respective individual objectives.

Based on the findings from the analysis, the novel concept of a MAS for energy management in a microgrid is developed. Thereby, a microgrid, comprising PV cells wind energy converters, consumers with non-shiftable loads, heat pumps as an example for consumers with shiftable loads, CHPs with heat storages and simple generators, which could be diesel engines without heat production, is considered. The objective of the control strategy is to maximize the amount of renewable energy use from the existent generators within the microgrid. The approach is based on competitive interaction between agents and a microgrid internal electricity market, where the market clearing price is set every 15 min. Furthermore a long term (24h) scheduling mechanism for the DERs is proposed in order to improve the efficiency in terms of the objective. The long term scheduling is based on forecasting the load and the generation of the wind energy converters and the PV cells. Each controllable generator and shiftable load is scheduled by a respective agent, which aims to minimize costs respectively to maximize profit. It is important, that the scheduling is executed sequentially instead of simultaneously in order to prevent overrunning effects due to untuned scheduling of multiple agents.