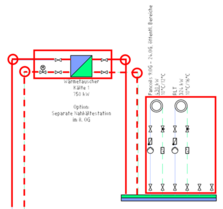 The share of building relevant final energy consumption stood by 35 percent in 2016 [BMWi, 2016]. The actions of the "Nationaler Aktionsplan Energieeffizienz" [BMWi, 2014] and the "Energieeffizienzstrategie Gebäude" [BMWi, 2015] of the German government count on the extension of renewable energy systems and the efficiency increase in buildings. By derived actions from Building Energy Performance Simulation (BEPS) and Building Energy Management Systems (BEMS) energy consumption in buildings can be reduced. For that matter, technical building equipment (TBE) plans play an important role, as with it all elements and their topological relations within the building’s energy system can be specified. However, these schemata oftentimes do not exist in machine-readable formats. The conversion into machine-readable formats can be done by the aid of artificial intelligence. This work therefore deals with the extraction of an object-oriented structure from mixed text and graphical documents showing complex building energy systems (BES). In doing so, the type and position of TBE symbols will be identified and the topological relations between them will be detected.

There already exist work that deals with this issue. Many of the known algorithms originate from the field of chemical process engineering in the context of Automation of Automation (AoA). Arroyo et al. [2016] describe a step-wise procedure, how an object-oriented data structure can be generated from graphical documents using optical detection and semantic analysis techniques.

In this work, also a step-wise approach is used. In doing so, the topology including different elements of TBE plans will be recognized. For this purpose, the TBE plan will be analyzed and an object-oriented structure will be introduced, which holds the different elements. Data sets used for training and testing the approach will be created. For the detection of TBE symbols, a Faster Region-based Convolutional Neural Network (Faster R-CNN) will be trained and a Template Matching (TM) based method extended by functions to detect geometrical transformed TBE symbols. A combination of the Canny edge detection and Hough-Transform algorithms are used to identify technical lines in the plans. Together with the developed approach of line crossing detection, connections between TBE will be derived.

The connection detection shows good results. It is evaluated using metrics such as Recall, Precision and F1 Score. An F1 Score of 82% is reached. However, the Recall and Precision differ to a large extent. The Precision is at 91%, whereas for the Recall a value of 75% is reached. Although 116 elements of the connection matrices were classified as True Positives, still 39 False Negative exist. The object detection using CNN is promising as the time for the detection procedure is really low compared to the TM method. It is evaluated using the Precision-Recall curve and Average Precision (AP) value. For all used object classes, except for heat exchanger, AP of at least 90% were reached. Further, they reach Recalls of 100%. The TM method generated poor detection results. Especially for the class flap and heat exchanger APs of only 54-61% were reached. Further, all classes deal with the problem not reaching 100% Recall.

One weak point of the connection detection is the line detection algorithm, where many False Positive and False Negative line detections exist. Together with shortcomings in the line crossing algorithm this leads to losses in the Recall value. An improvement in the calibration of the Hough-Transform could reduce the deviation. Although the object detection using CNN already shows good results, further research should be done. It must be extended for a broader range of symbol classes, but also a higher variety of symbols in the same class. For the TM approach, relative scaling parameters proportional to the TBE symbol dimensions should be introduced. As the TM approach can be useful in some use cases where the symbol classes and types can change quickly, further continuation of research is justified.