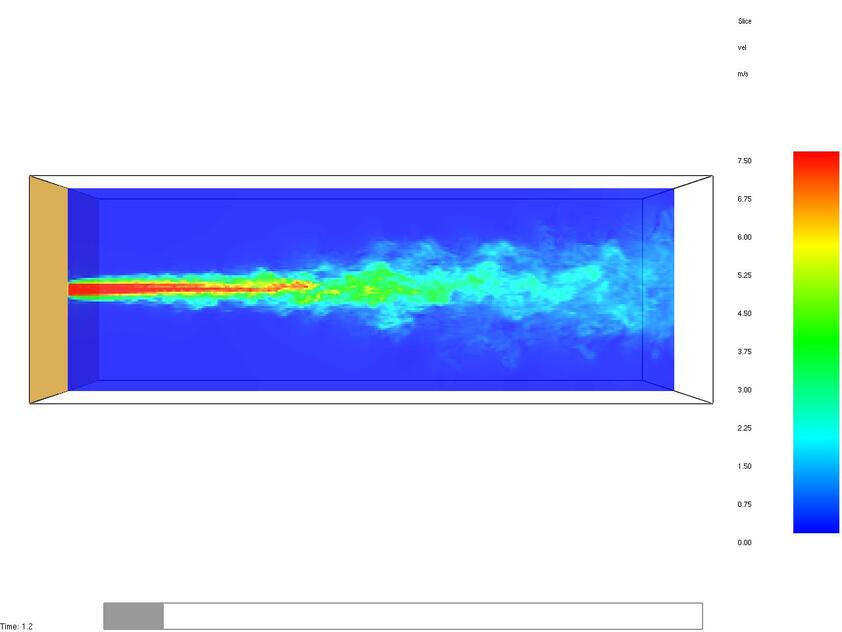 Copyright: EBC Visualization of a free jet via SmokeView

Pulsating jets have a great potetial to optimize residential air conditioning systems. They are, however, little studied. The spread of the jet is governed by new impacts due to the pulsation. As a consequence it is difficult to predict their behaviour and influence on the ventilation. Flows with time-dependent input signals are already used in other technical sectors. Therefore data of the analysis of pulsating jets already exist.

In the following work the existing data of pulsating jets have been collected and classified by using common dimensionless parameters, such as Reynolds- and Strouhalnumber. Furthermore a simulation environment has been developed in Fire Dynamics Simulator, a freely available simulation software, to reproduce the results of the literature. This software works with a simplified LES method.

To evaluate different impacts on the pulsed jets behaviour, frequency and the velocity at the nozzle exit have been varied independently of one another. Both parameters, frequency and Reynoldsnumber, have shown effects on the flow behaviour.

From the simulation arose similar velocity profiles for steady and pulsating jets. Jet widening and a faster decay of the time-averaged velocity on the jet axis have been confirmed. An increase in eddy formation and turbulence have been shown as well. Through the analysis of the free jet and its velocity profiles and half-value radii it can be seen that self-similarity remains for pulsating jets.