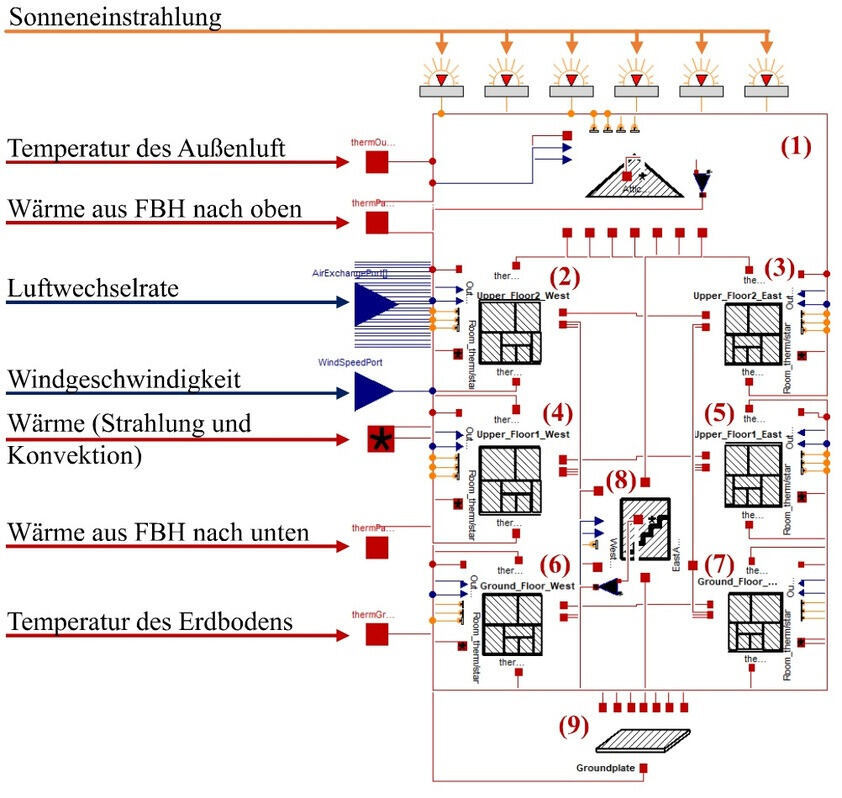 Investigations into the research, testing and evaluation of heat pump systems in the field of building energy technology form a core aspect of the research carried out at the Institute for Energy Efficient Buildings and Indoor Climate (EBC) at RWTH Aachen University. The building and hydraulic models represent an important component for the investigation of such energy systems. These are combined with the real generation system for interaction via a hardware-in-the-loop test rig. In order to be able to make realistic statements about both the heat pump system and the modelled building, the requirements of accuracy, parametrization effort and computing efficiency of the simulations must be weighed against each other and implemented as required.

In the context of this work, a detailed simulation model of an apartment building is finalized in a first step, prepared for the use of the heat transfer system of an underfloor heating system and made scalable for later investigations. In addition, a simplified building model is prepared and parameterized for later comparison on the basis of existing modelling approaches.

In second step, the models of heat distribution and heat transfer are worked out. Similar to the building model, this is done in two variants. First, a detailed model is generated using the Modelica Network Generator tool. In the further process an approach for the simplified modelling of underfloor heating systems including the hydraulic supply network is developed and implemented on the basis of fewer desgin parameters.

In the last step, the generated models are examined on the basis of three secnario experiments performend on the institute's hardware-in-the-loop test bench for the same test day and evaluated in the sense of a comparison. This comparison has shown that there are not negligible energetic deviations regarding the modelling approaches. This applies especially to the dynamics of the variables at the chosen system boundary, such as the heating water mass flow. At the same time it turned out that the modelling differences have a marginal influence on the efficiency of the investigated heat pump system.

Above all, the development of an approach for the simple and efficient modelling of heating systems like underfloor heating and the subsequent integration into the overall concept of an energetic building model offers the possibility to create meaningful investigations and simulations basing on less known parameters.