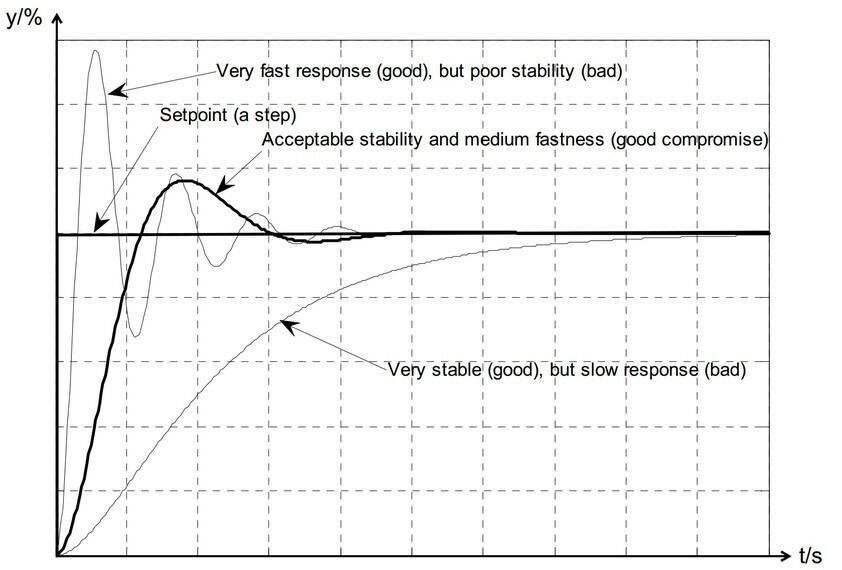 Copyright: EBC Response in the process output variable due to a step change of the set point

An efficient contribution to the energy transition can be made by efficiently operated building technology such as Air Handling Units (AHU). Therefore, a well-functioning controlling is an important premise. Poor control quality can not only reduce comfort but also result in more energy consumption and life cycle costs (LCC). This paper focuses on the effects of heating and cooling coils on the control ability and energy consumption in AHU systems.

Through investigation of heating and cooling coils in open loop system, I find the valve opening, pump speed and air flow are three parameters that have a significant impact on system's control performance. Besides, the coil character can be changed by varying valve opening in mixing circuit system. Furthermore, for the system I studied, the mixing circuit system has better control performance than throttling circuit system, and the full load condition has better control performance than part load condition. Then feedback control of heat exchangers are analyzed. After attempting different controller tuning methods for the full and part load condition for different control strategies, we find that the model based control tuning method in dymola, which is from the project EBC ZUGABE, has the best control performance. Compared to the classic controller tuning method such as Ziegler-Nichols method, its control performance for defined cases can be 50% to 100% higher. Additionally, the new control concept developed with pump control has better control ability than traditional valve control. It performances well in the event of set point changes or disturbance appears. Moreover, during the study of interaction between subsystems the new control concept also shows good stability.

Finally, I developed a methodology to evaluate LCC and energy consumption which is used for AHU and single subsystems in view of control ability. The calculations show that if the control performance can be improved then we can save 900 to 1000 Euros per year for AHU systems with rated air flow 3000m3/h. Furthermore, general advices to minimize energy consumption and LCC are provided.