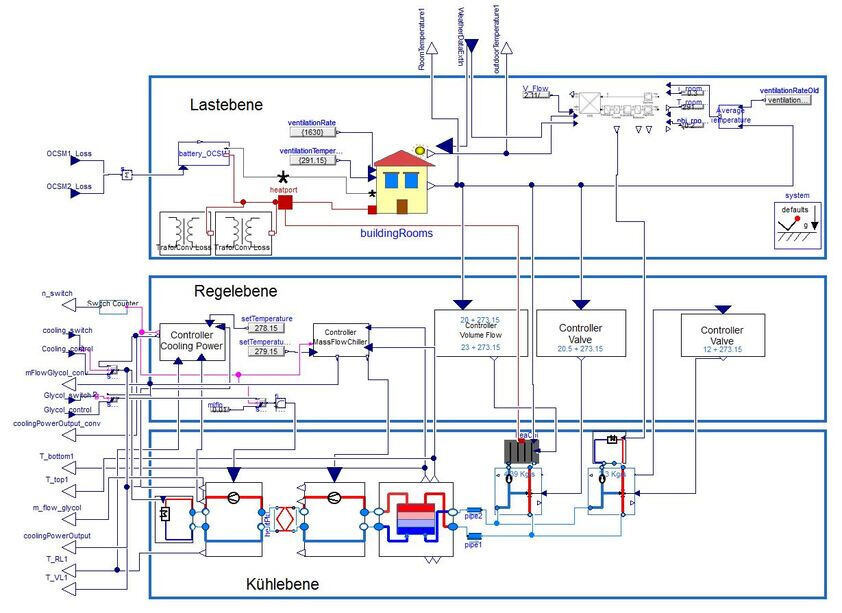 Due to a rising demand of the integration of sustainable energies in Germany, the pilot project M5BAT was founded. This project is a large-scale battery storage system, which investigates the integration of different battery technologies into the electricity grid. The project is managed by several institutes of RWTH Aachen University. The institute for Energy Efficient Buildings and Indoor Climate (EBC) contributes in the area of efficient air-conditioning of buildings. The cooling load of the batteries depends on their performance and requires reliable air conditioning. Their efficiency depends on the respective room temperature. Because of the high battery power, the energy consumption of the air conditioning is significant. In the framework of this thesis a model predictive control algorithm will be integrated, in order to reduce the energy consumption. The existing thermal model of M5BAT was segmented into different standardized modules. For the examination of the model predictive control algorithm and a possible scalability, a simplified battery storage system model was used in addition to the primary model. The implemented control algorithm shows partial improvements compared to the conventional control system by a reduction of the energy consumption, however there is more potential by adding more controllers to the model predictive control. Load scalability is given within certain constrains regarding the maximum cooling power and system size. Due to many switching operations inside of the system at high cooling loads, the extension of the system size and the prediction horizon leads to a negative effect on the simulation time.