Modeling, Optimization and Techno-Economic Analysis of a District Cooling System 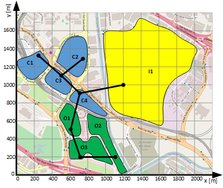 District cooling offers an energy and cost-efficient way to meet the space cooling demands of tropical cities like Singapore. Due to economies of scale, generation of chilled water is more efficient and hence more cost effective for larger amounts produced. District cooling systems (DCS) make use of economies of scale by generating chilled water centrally and distributing it through a piping network to several consumer buildings. This study outlines two optimization methodologies for district cooling systems. The first methodology optimizes the design of a distribution network while the second methodology optimizes the design and operation of cooler plants. With the two methodologies, two case studies are investigated.

District cooling systems consist of cooler plants, a distribution network, and consumer buildings. The first optimization methodology computes the optimal distribution network layout with respect to several constraints. The constraints limit the pipe layout and sizing as well as the chilled water pressure and temperature. Input parameters for the optimization are geographical coordinates and peak cooling demands for eight consumer buildings with various occupations. There are four commercial buildings, three office buildings, and one industrial plant. It is the optimizer’s objective to minimize the investment and operational costs. The investment costs are the capital cost for the pipes and amount to SGD3,712,511. The operational costs are the pumping costs and the maintenance, repair, and operations cost which come to SGD1,108,125. The chilled water, which flows through the distribution network, is generated in chiller plants. The second optimization methodology determines the number and size of chiller plants as well as their optimal scheduling. In the design optimizer, a set of vapor compression and absorption chillers is defined based on the weekly cooling demands peak load. For the base case, six vapor compression chillers and two absorption chillers are selected. The design optimizer’s target to minimize the investment costs. Subsequently, in the operation optimizer, the chiller plants are scheduled to meet a weekly cooling demand profile in the most efficient way. The input parameters are the consumer building’s weekly cooling demand profile and the electricity price profile. The chiller plants follow minimum up- and downtime constraints and their part-load efficiency behavior is linearized. The scheduling has a deterministic outlook for future time steps. It is the optimizer’s aim to minimize the operational costs. The total net present value for the optimal distribution network layout and chiller plant design and operation amounts to SGD25,069,995. The project has a payback period of 2.8 years.

With the developed optimization methodologies, two case studies are investigated. The first case study investigates the advantage of giving the optimizer a deterministic outlook for the next time steps. If a storage tank is introduced, a longer outlook enables cost saving potentials of up to 2.37 % for an outlook of 12 h. If the demand profile and the electricity prices for the next time steps are known, the storage tank can be utilized better. The second case study examines whether it is economically reasonable to connect two remote buildings to the grid. The remote buildings require chilled water at a lower temperature than the rest of the grid. The lower temperature requirements have an impact on the overall chiller plant operation and efficiency. The decision depends on the distance of the remote building from the existing grid and its cooling demand. The highest net present values are obtained if the remote building is close to the existing grid and has a high cooling demand. If only one of the two remote buildings ’I2’ and ’I3’ are connected, the net present value increases by 18.2 % and 17.6 %, respectively. If both buildings are connected, the net present value increases by 38,6 %.