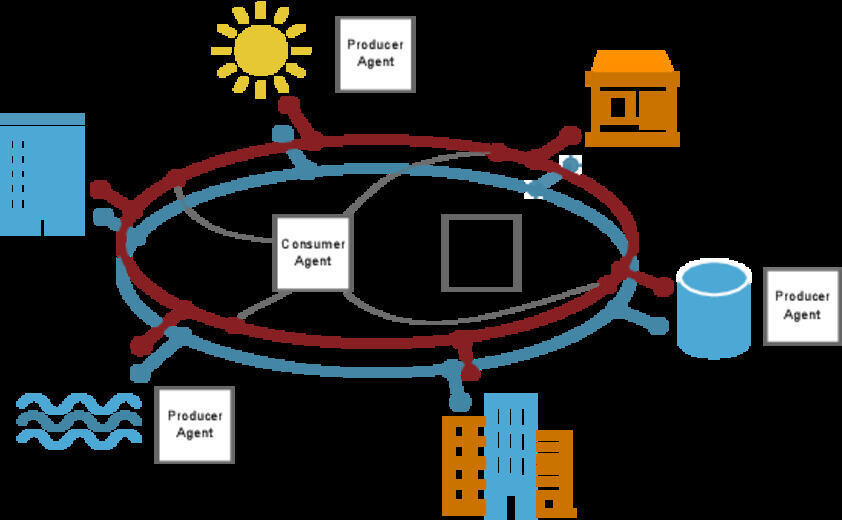 Copyright: EBC The figure shows a schematic of a bidirectional low temperature network which contains different types of sources and consumers as well as agent-based control.

Bidirectional low temperature networks are a novel concept that promises more efficient heating and cooling of the built environment. Early research shows the theoretical benefits in terms of exergy efficiency over other technologies and pilot projects indicate that the concept delivers good performance if heating and cooling demands are diverse. However, the operation of these networks is not yet optimized and there is no quantification of the benefits over other technologies in various scenarios. Moreover, there is a lack of understanding of how to integrate and control multiple distributed heat and cold sources in such networks. Therefore, in the course of this work, a concept based on a temperature set point optimization and agent-based control which allows the integration of an unlimited number of sources was developed. Afterwards, it was applied to two scenarios representing neighborhoods in San Francisco and Cologne with different heat and cold demands and boundary conditions. The performance of the system was then compared to other state-of- the-art heating and cooling solutions with the help of dynamic simulation in Modelica. The results show that bidirectional low temperature networks without optimization produce 26 % less emissions in the San Francisco scenario and 63 % in the Cologne scenario in comparison to the other heating and cooling solutions. Savings of operating costs are 46 % and 27 %, reductions of primary energy consumption 52 % and 72 %, respectively. The presented operation optimization leads to electricity reductions of 13 % and 41 % when compared to non-optimized networks and the results indicate further potential for improvement. The study demonstrates the advantage of low temperature networks in different situations and introduces a control concept that is extendable for real implementation.