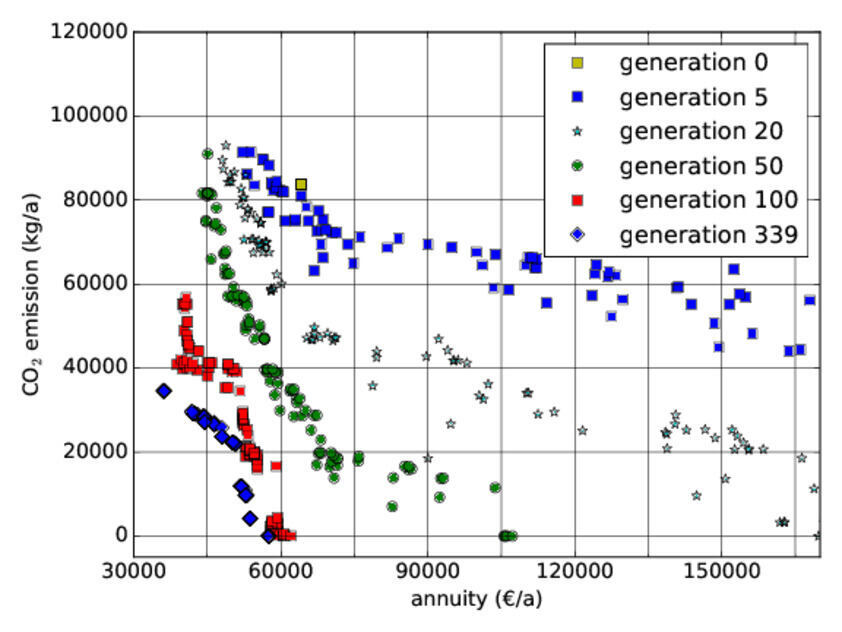 Copyright: EBC Developement of solutions while optimizing distribution and dimensioning of energy systems of a seven building urban quarter. The objective function values annuity and CO2 emissions of each solution from six different generations are shown.

Increasing the energy efficiency of residential buildings plays a major role for the effort to reduce greenhouse gas emissions. When modernizing urban quarters, the optimal dimensioning and distribution of energy systems allows saving great amounts of energy. The wide range of available technologies such as solar power, combined heat and power, condensing boiler technology or heat pumps leads to many different ways to cover the energy demands of buildings. Besides the savings potential, the overall costs are very important when realizing such a modernization. Due to those often contradicting objective functions and the high number of possible solutions, the usage of a mathematical optimization method is necessary. Notably, the optimization of larger urban quarters leads to great increases of calculation efforts. To address this problem, a genetic algorithm to optimize the distribution and dimensioning of city energy systems is described in this thesis. Designed as a multicriterial optimization, the costs in form of the annuity and the CO2-emissions are minimized at the same time. The urban quarters and their energy systems are modeled with the python toolbox PyCity_Calc. For simulation purposes time resolved load profiles for thermal and electrical demand are used. A simplified static control system is implemented to cover the demands at every time step. Results of a seven-building urban quarter optimization with a mixed linear integer problem (MILP) formulation are used as a benchmark. Moreover, the performance of the genetic algorithm when optimizing a 50-building urban quarter is evaluated. It can be shown, that this optimization is possible in less than 100 h. The usage of boilers in combination with small or no thermal energy storages plus solar power systems was found to be the cheapest solution. Solutions with lowest emissions include combined heat and power systems in combination with local heating networks and solar power systems. The decision for one solution can only be made when weighing the objective functions in a purpose-driven manner. In addition, it can be shown that the genetic algorithm decreases the optimization time of the MILP-benchmark by two orders of magnitude. This high efficiency also enables the genetic algorithm to perform the optimization task on an urban quarter with 50 buildings in reasonable time.