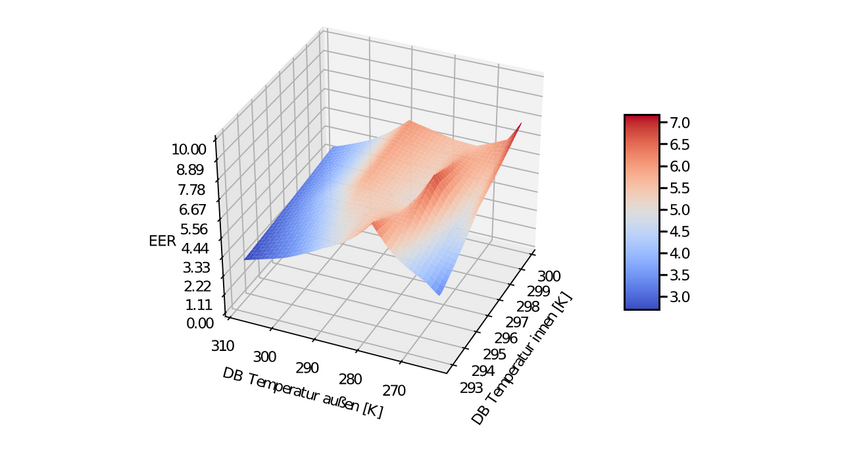 When implementing a smart grid, the use of distributed small and medium-sized storage units can contribute to increasing the flexibility of the distribution networks. Therefore the project Energy Local Storage Advanced system (ELSA) was started in cooperation with a number of European partners. The aim is to manage and regulate local loads and producers using energy management systems based on information and communication technology (ICT). The Institute Energy Efficient Buildings and Indoor Climate (EBC) is investigating the possibility of cooling battery storage units by means of room air conditioning. The test setup consists of six second-life lithium-ion batteries from electric vehicles, which are accommodated in an ISO container.

An air conditioning unit is attached to the container to dissipate the heat loss that occurs when the batteries are charged and discharged. The aim of this work is to model the container and develop a Model Predictive Control (MPC) for the air conditioner. The purpose of the control is to keep the room temperature and thus the batteries within a defined temperature window by means of estimated future heatlosses. Particular attention is to be paid to the usefulness of the power-network. This means that the air conditioning should be largely geared to the charging behaviour of the batteries.

First, a model of the ISO container used was created using the software tool TEASER. This was then extended in a simulation software by the provided battery model. The complete model was then derived as a FMU (Functional Mockup Unit) in order to integrate it into the control software. The MPC was written in Python and validated by means of an additional simulation. After implementation, the model and controller parameters were adjusted.

In the course of the tests, the desired behaviour of the air conditioning system could be approximated, but the control system was delayed. An adjustment of the prediction horizon as well as the sample step size led to a more frequent insertion of the control during the discharge times of the batteries. However, the delayed reduction of the air circulation rate could not be completely corrected. Tests under cold ambient temperatures revealed a change in the controller behavior, which makes it possible to consider a temperature dependency of the MPC parameters.