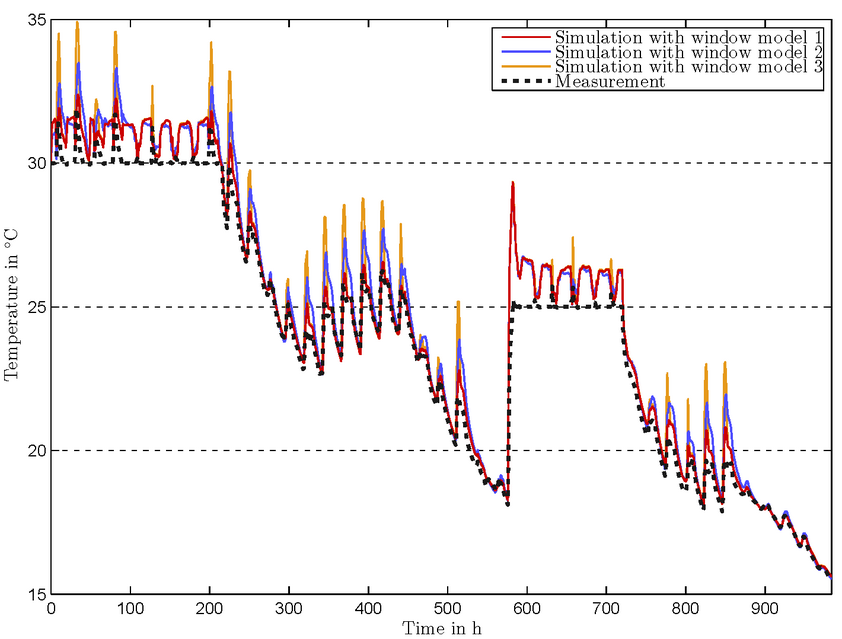 Aim of this thesis is to test and to improve a thermal building model, which bases on components of Modelica-libraries provided by the Institute for Energy Efficient Buildings and Indoor Climate (EBC), using measured data. The EBC-Modelica-Libraries contain simulation models for energetic examination of buildings and components. The measurement data used for this empirical validation, originates from experiments executed on the testing site "Twin House" of the Frauenhofer Institute for Building Physics (IBP). The measurements were performed in Holzkirchen (Germany) in 2013 in the context of the IEA Annex 58 experiments.

In order to reproduce these experiments via simulation, models of the two buildings and the installed devices are implemented in the simulation environment Dymola using components of the EBC-Modelica-Libraries. Additionally further model components (e.g. window models) are developed allowing a more precise replication of the Twin House. With these building models the measurement phases of the experiments are simulated. The generated simulation results are compared to the measured values and occurring deviations are examined.

The simulation results disclose considerable differences in the behaviour of individual rooms. Especially rooms on the western side of the buildings show noticeable deviations during periods with controlled temperatures.

It is proven, that several elements cannot be the source for these deviations. For instance the modelling of the air volume in rooms, either with dry or moist air, isn't considered to be a decisive factor in this case. Instead there is evidence, that the deviations are linked to the heating phases.