You Are Here: Exergy-based Control Strategies for HVAC Systems

The enhancement of building automation systems offers the opportunity for a large reduction in the final energy demand of buildings. In this research project, we thus analyze ways to apply the thermodynamic method of exergy analysis on the control of complex building energy systems. We focus on the improvement of energy efficiency while ensuring indoor air quality and thermal comfort.

The Quality of Energy Flows

The only thermodynamic losses of a building that can be discovered in an energy analysis are heat losses that are transferred to the environment unused. In building energy systems, however, thermodynamic losses occur mainly in irreversible processes such as heat transfer, throttling and chemical reactions. In order to correctly assess the losses, it is therefore necessary to consider not only energy flows but also their quality which, in thermodynamics, is expressed in terms of exergy.

We define a control task as an optimization problem by using the exergy destruction as target function. In this formulation, the manipulated variables become optimization parameters that, for instance, are constrained by allowable ranges of temperatures or air quality indicators.

An approach to evaluate the cost efficiency of building energy systems is the exergoeconomic analysis which combines exergy analysis and economic principles. It thus provides additional information on the costs of exergy destructions and exergy losses which could not be obtained in a conventional exergy analysis and an economic evaluation. According to this approach, the manipulated variables are set to minimize the total costs (instead of exergy desctruction).

The most important tools used to test and demonstrate the novel control strategy are the Monitoring Control and Interface System (MCIS) of the multi-functional E.ON Energy Research Center main building in Aachen as well as a simulation and optimization environment. A model predictive control algorithm developed in this project conducts exergy analyses and optimizations automatically. The algorithm sends manipulated variables to the actuators in the building via the MCIS and assesses the system behavior based on monitoring data. 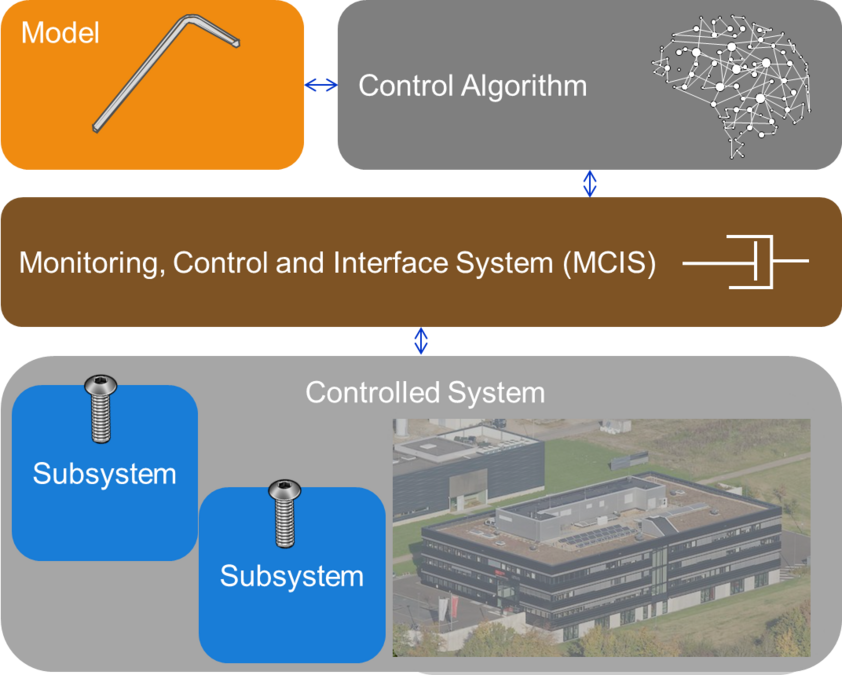 We gratefully acknowledge the financial support provided by the BMWi (Federal Ministry for Economic Affairs and Energy), promotional reference 03ET1218A. We would further like to thank our project partners at Institute for Energy Engineering, TU Berlin.